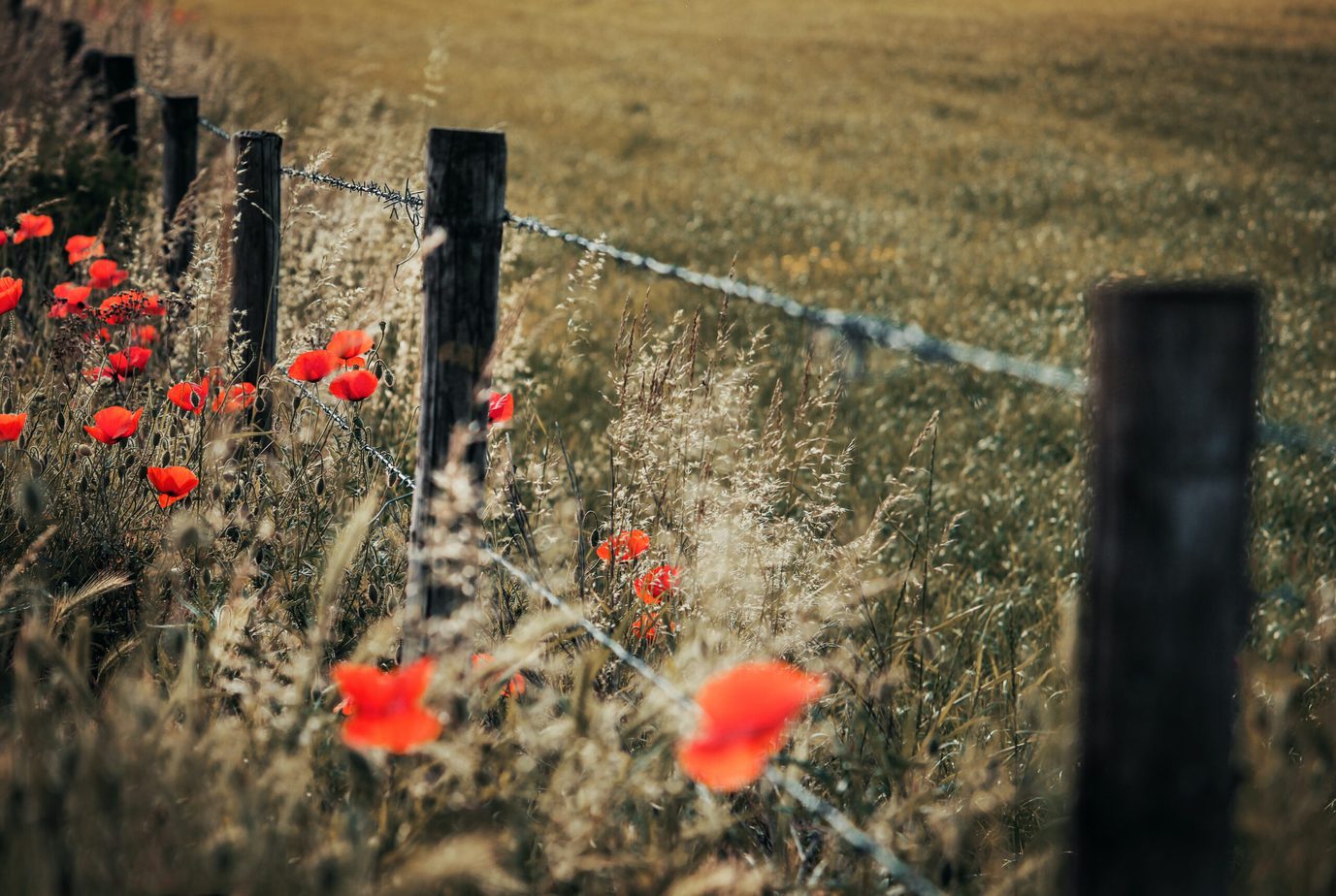 Every year we take the time to remember on Remembrance Day.  We think about the many sacrifices made by our armed forces and those who love(d) them from World War I all the way to those who currently serve today.

We know that millions of people over the last century were impacted by these incredibly horrific times in our world.  But we thought this year, we would bring you some snippets from the personal stories of a couple of family members of our staff who served in World War II.  There were millions who fought of course.  But these “millions” were made up of individual people who had individual lived experiences and stories.

These are three of the young men who volunteered to go off and fight for the liberation of many European countries –the Netherlands, France, Belgium, Poland, the United Kingdom and many others.  And like I said, they are three of the people that some of our team here knew and loved.  We are proud to call them “family” and think of them each year on Remembrance Day.

Leo had always been interested in flying.  So when World War II broke out, he jumped at the opportunity to train as a pilot.  He trained with the Royal Canadian Air Force for a couple of years here in Canada and also spent some time training in England.

Leo began flying many missions over Germany and was a Pathfinder flying De Havilland Mosquitoes towards the end of the war.  These fighter-bomber planes were mainly made of wood so that they wouldn’t be easily picked up by the German radar.

Leo was first shot down while flying over the North Sea in 1944.  The following year, the Germans shot him down while he was flying over Germany, and he sustained fractures to his back.  This second time, the Germans captured him, and he spent the last two months of the war as a prisoner of war in Luftwaffe Stalag 3.  Mercifully, Leo received the medical attention his back needed until he was released with the Allies’ victory in 1945.

After the war, Leo stayed in the Air Force and received his commission as a lieutenant.  He became a flight instructor and taught in western Canada.  He had already earned his funeral director license before the war.  So eventually he made his way back to Toronto where he carried on his father’s business with the funeral home.

For more stories and history behind the Cardinal family, feel free to check out our History page. 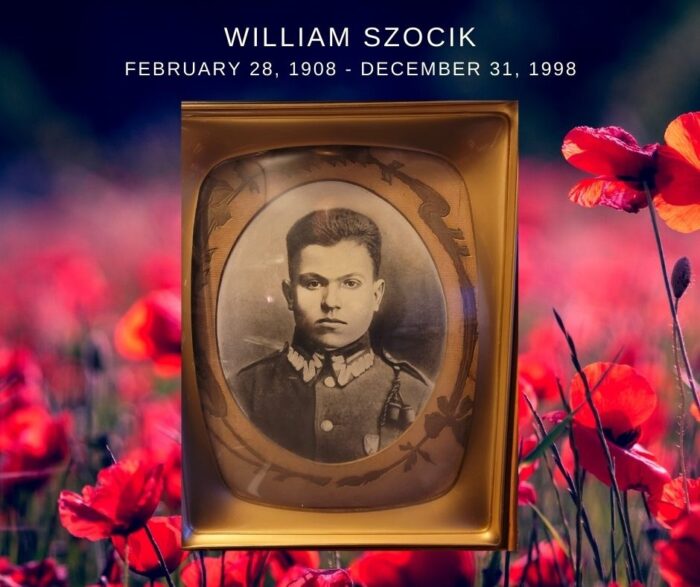 Young William was about 21 or 22 in this photo when he enlisted to serve his home country of Poland before immigrating here to Canada.  Little did he know that about a decade later, World War II would break out which would take him all over the world.  At this point, William was 31 years old, and he served for almost the entirety of the war as a foot soldier as well as in the cavalry and in the tank division.  He even spent some time in a Russian prison.

William used to tell the story of when he was asked while in prison, “Whose side are you on?”

“I’m with the Allies,” he told them.  The honesty of his answer in the face of his enemies earned him their respect and ultimately saved his life.

But towards the end of the war, William was wounded as he caught some shrapnel in his left upper thigh.  His son Bill remembers being fascinated as a young boy by the big indentation in his father’s leg.  Other than that, William didn’t talk very much about his war experiences.  Like many of the veterans that came back from war, there was an unspoken understanding that they should just come home and “get on with life” to the best of their abilities.

William did however become good friends with some fellow Polish veterans.  Shortly after the war, he and several of them immigrated to Canada together.  Who knows what kinds of stories were exchanged between them in the years that followed!  Either way, I’m sure they shared a common bond which helped them move through the rest of their lives. 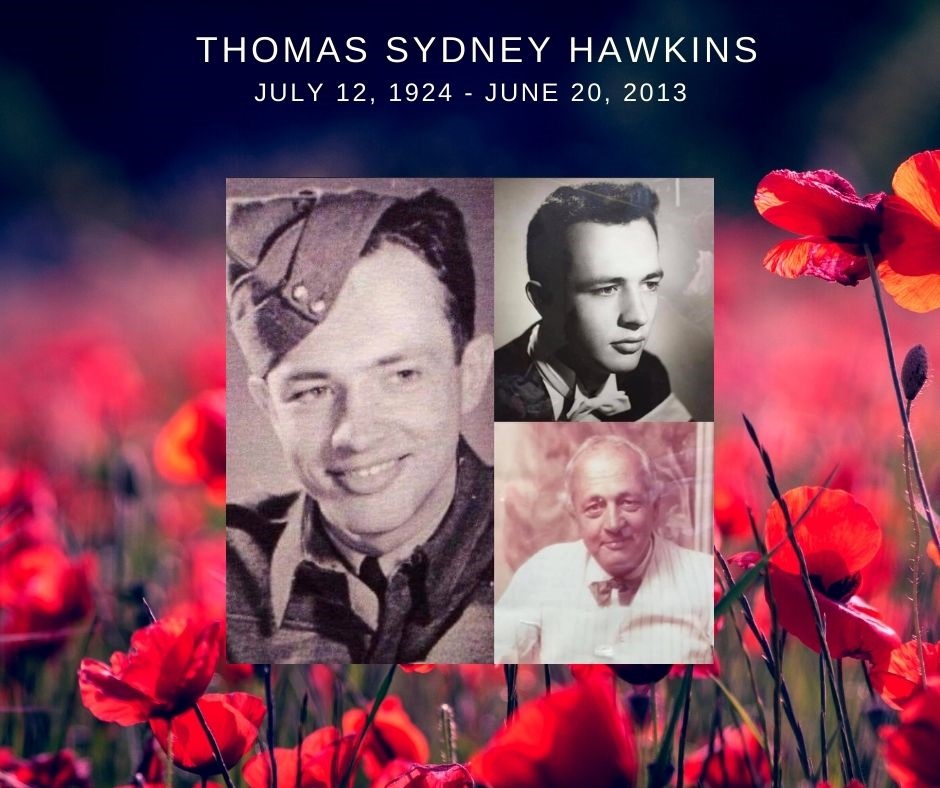 My Grandpa only saw about three months of actual combat in World War II.  But the sacrifices he made both in the serious wounding of his body and his mind for the rest of his life were profound.  On many Remembrance Day holidays, I remember calling him up to say thank you.

When Grandpa died back in 2013, my brave grandmother Marie Hawkins who had spent 65 years of her life married to him wrote and delivered the eulogy.

The following is an excerpt where she reflected on his war experience.

“Tom had so many fond memories of their life in Forest, Ontario. Life in general seemed more stable then; the pace a little slower than now. The church and the school were the mainstays of the town.  People had time for each other; entertainment was of their own making; friends remained friends for life. In retrospect, it seemed idyllic.  Then came rumours of Hitler, and in 1939, WW2 became a reality. Tom, like most teens, could hardly wait to ‘Join Up’.  After finishing Grade 13, he did so.

He joined a group of recruits for basic training and sailed from Halifax on the troop ship, ‘Mauritania’ to Liverpool on Christmas Day 1944.  From The Army Base at Aldershot, he joined the Essex Scottish Regiment.  From there, he was deployed to France, Belgium and Germany.  As he used to tell us, ‘The army was great fun until I found out the enemy was using live ammunition.’

At the “Crossing of the Rhine” battle, find out he did.  On March 8, 1945 he was hit with 4 bullets and lay on the cold winter ground for 7 hours until the stretcher bearers could get to him. He was in a field hospital where he remembered the padre administering him “The Last Rites”.  Then he woke up in a Roman Catholic hospital in Belgium.  Finally, he was flown to the Canadian Army hospital at Horley, Sussex. He sailed home on a hospital ship “El Nil” on his 21st birthday Jul 12, 1945 and spent the next year in hospital.

There was no such thing in those days as Trauma Counselling. It seemed the attitude was “Just get on with your life the best you can”.  So like many veterans, he suffered from the loss of buddies and the horror of war for the rest of his life.”

Each Remembrance Day, I am deeply moved when I think of the life I am so privileged to enjoy now because of the millions of people like Leo Cardinal, William Szocik and Grandpa Tom.  On behalf of the Cardinal, Szocik and Hawkins families, I want to offer a heartfelt thank you to each person who has taken the time to read and share this article and remember them.  We would also love to hear any stories and photos you have about the people you are honouring for Remembrance Day week as well.  Feel free to comment below and/or share your stories and photos on our Facebook page.