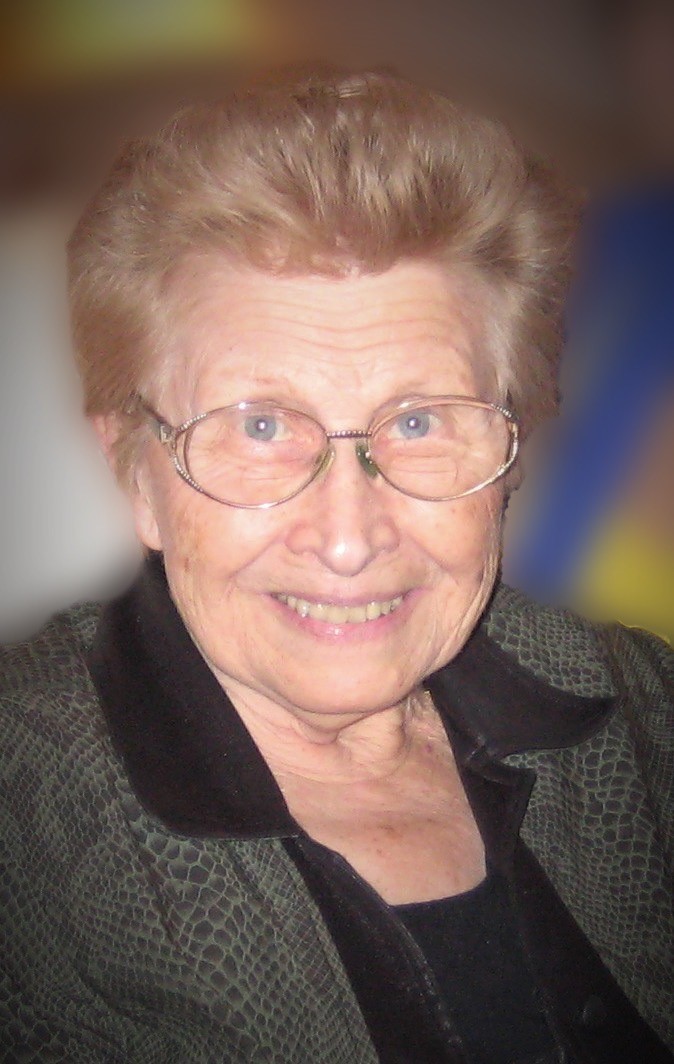 Olena (Helen) Chyczij was born on December 25, 1929 in Buchach, Ternopil Oblast, in Polish-occupied Ukraine in the family of Danylo and Iryna (Fedushchak) Luciw.

The onset of World War II brought new occupiers to western Ukraine: first the Soviets and then the Nazis.  When the defeat of the Nazis in the Battle of Stalingrad paved the way for a return of Soviet terror to Ukraine, millions of Ukrainian refugees fled to seek refuge in western Europe.  Olena, along with her parents, younger brother Lev, and grand father Ilya, were among them.

They found their way to Displaced Persons (DP) camps first in Ellwangen, Germany and then Landeck, Austria, where they tragically lost Lev and Illya to diphtheria.

During this time Olena was forced to work in a German munition factory, where exposure to heavy metals may have predisposed her to Parkinson’s Disease that she battled in her later years.

Despite the difficult conditions, Ukrainian refugees created community structures in the DP camps, including schools, churches and cultural groups.  It is here that Olena joined the ranks of the Plast Ukrainian Youth Association, an organization to which she devoted many volunteer hours throughout her life.  It is also in the DP camps where Olena formed the lifelong friendships that sustained her in her new life in Canada.

After the end of the war, Olena’s family had the incredibly good fortune to be sponsored for emigration to Canada by Joseph and Rose Fedushchak. They, along with their daughters Luba, Vera, and Nadia, welcomed them to Canada with open arms.

The extended Luciw family, including Josyf, Sofia, and their children Oleh, Volodymyr and Marta, settled in Toronto.  At the wedding of mutual friends, Olena met her future husband Mykola (Nicholas).  Together, they raised three daughters: Alexandra, Irena, and Marta.  With Mykola’s untimely death in 1977, Olena was widowed at the age of 48.  She continued to provide stability and security for her daughters, ensuring that their education was not interrupted, the way hers had been because of the war.

Olena was blessed with three grandchildren - Tynia, Pavlo, and Kassandra – and spent many summers with them at the family cottage at Cawaja Beach. She instilled in them a love for their Ukrainian culture, heritage, and traditions, and ensured that they learned to speak Ukrainian by pretending not to speak English.

Olena left us on March 21, 2020, just as the COVID-19 crisis was escalating.  Her family will lay her to rest in a private ceremony as Olena would not have wanted anyone to risk their health and safety for her sake.  When our world becomes a safer place there will be a Memorial Mass and Tryzna so that family and friends can share in a celebration of her extraordinary life.

We would like to thank the many family and friends who provided care and support to Olena in her final years, as well as the medical professionals and all staff at the Movement Disorders Clinic at Toronto Western Hospital and the Ukrainian Canadian Care Centre.

At this time, the family asks that you honour Olena’s memory by supporting the organizations and causes that touched her life:

Plast Ukrainian Youth Organization – Toronto.  Donations can be made online or mailed to Plast Toronto, 516 The Kingsway, Toronto, ON M9A 3W6 or by calling 416-769-9998.  (Please specify Youth Program Development in Memory of Olena Chyczij). https://www.canadahelps.org/en/charities/id/61259/

Toronto General and Western Hospital - Movement Disorders Centre Research Fund (Please specify that the gift is in memory of Helen Chyczij and the Gift Designation is ‘As specified by the next of kin’) https://support.tgwhf.ca/site/Donation2?1487.donation=form1&df_id=1487

Burial Time is an Estimate

Luba Maryn Howard
Dear Alexandra, Irena, Marta, Chrystyna, Pavlo and Kassandra, Please accept my deepest condolences on the passing of your beloved mother and grandmother. I only learned of this today on Facebook from my home in Naples, Florida. She was instrumental in forming you in Ukrainian traditions and excellent education. Vichna Yiyi Pamyat!
Halyna Hilferink
Dear Lesia, Please accept my deepest and most sincere condolences to you and your family! Take comfort in your fond memories of your beloved Mother at this very difficult time. Vichnaya Pamyat ! Halyna Hilferink nee Stefaniuk
Yarema Bachynsky
Dear Lesya, Marta, Iryna and the Chyczij extended Family: Please accept our sincerest condolences on the passing of Pani Olena. Vichna Pamyat!Bachynsky Family in Kyiv
Andriyy Chorniyy
Hello Irena! May your mother rest in peace together with your father! Your friend Andriyy Chorniyy
Melyssa Wright
Dear Tyn, Irene, and Family , We are so sorry for your loss and thinking of you during this time. The obituary was beautiful and Helen was obviously a special person to raise such strong and wonderful women in your family. Please accept our condolence. Melyssa & Jason
Catherine (Katrusia) and Jeff
Dear Marta, Irka , Lesia and family. Sending you sincere condolences. Your Mom will always be remembered as a beautiful person and a real lady. I will miss seeing her and saying hello. May all your happy memories help you get through this difficult time. Vichnaya Pamyat. May your Mother Rest in the Lord and in Peace.
walter kuplowsky
Dear Lesia, Iryna and Marta, We were saddened to hear of the passing of your mother. Please accept or sincerest condolences to you and your family members in this moment of grief. Your mother will be in our prayers. Vichnaya Pamyat Walter and Win Kuplowsky
Stefan & Marta Kuziw
We are sad to hear of your mama's passing. We have wonderful memories of her huge heart and radiant smile in Etobicoke and Cawaja Beach. Please accept our deepest condolences. Vichnaya Pamyat!Stefan & Marta Kuziw and family
Daria Luciw
Doroha Lesia z rodynoju! I am so sorry to hear of your mama's passing. It is such a difficult time for everyone and I'm sad that you have to deal with even more grief. She was of a generation that saw some incredible tragedies and travesties, and then turned around and help build an incredible Ukrainian community in Canada. Wishing you much strength at this time....Vichnaya Pam'yat!
Sonia Maryn
Wishing the Chyczij family strength and fortitude during this period of grief. Losing a parent, no matter when, is a sad and deeply felt loss. I remind myself how fortunate those of us who have had a parent for so many decades have been. We have seen our children and, in many cases, our grandchildren, growing up knowing and loving their Baba and Dido, warming our hearts and bringing us ever closer to those who sacrificed so much for us. We owe this generation of Ukrainians, post-WWII immigrants, so much. In the face of evil adversaries, the Nazis and the Soviet Union, they were forced to leave their beloved land to start a new life in an adopted country, with next to nothing. Nonetheless, together they built a community with vibrant organizations, institutions, and places of worship that have prevailed and benefitted, not just the broader diaspora, but, our shared homeland Ukraine. Deepest condolences. Vichnaia Pamiat. Sonia Maryn and family.
Petro & Hania Woloszansky
Our condolences.
Olya Kuplowska
Doroha Lesiu and Family, My deepest condolences to all of you at this sad and difficult time, made even more difficult by the pandemic around us. Take comfort knowing that your dear mother and grandmother is at peace, free from pain, discomfort and worry. Wishing you strength and courage. Keeping you in my prayers. Vichnaya Pamyat!
Let Us Help You In This Time Of Need Contact us